Cosmic Encounter might just be the best modern board game ever created.

The fact that each player has one seemingly game-breaking power, along with the sheer number of aliens makes the combinations explode. Each combination of aliens changes the rules in a way that you, or perhaps anyone else, has ever seen before. It doesn’t tend to get too out of control due to players being able to self-balance by not allying with a player in the lead, or even by allying in defense against that player. And yet there are no hurt feelings because each turn your target is chosen randomly. It’s a masterpiece. I don’t think I’ll ever stop playing.

My only problem with Cosmic is its footprint. I often find myself wanting to play games with my less-nerdy friends, often in a dinner party setting. Cosmic is a big game: a big box, lots of components and a decent amount of setup. There are tons of cards, flares and the rules are a bit unwieldy. I find that convincing people to play a game where they play as an alien is sometimes difficult as well.

But I don’t want to play Balderdash and I’ve played Love Letter to death. There must be a way to take the essence of Cosmic and streamline it into something simpler and more approachable. That’s been a nagging thought in my mind for the past few years. But as an inexperienced board game designer (it’s been all video games for me), every time I tried to design a prototype, I’ve made little progress.

Then this summer, tired of being blocked on this game idea, I decided to unblock myself: I gave myself a goal of creating ANY game in one evening. I gave myself 3 hours to describe a game in a Google Doc that I could play with my friends the next day.

The first thing that came to mind was vampires. I wrote three pages of rules where players attacked humans that were positioned between them, trying to take them as servants to gain influence points. Energy flowed me as I typed furiously in my dark apartment in Bologna, with a huge smile on my face. It was crap I knew, but it was my first board game and I was exactly what I needed to unblock myself. I played the game with my friends the next day with some index cards and some pieces from a spare copy of Coup. 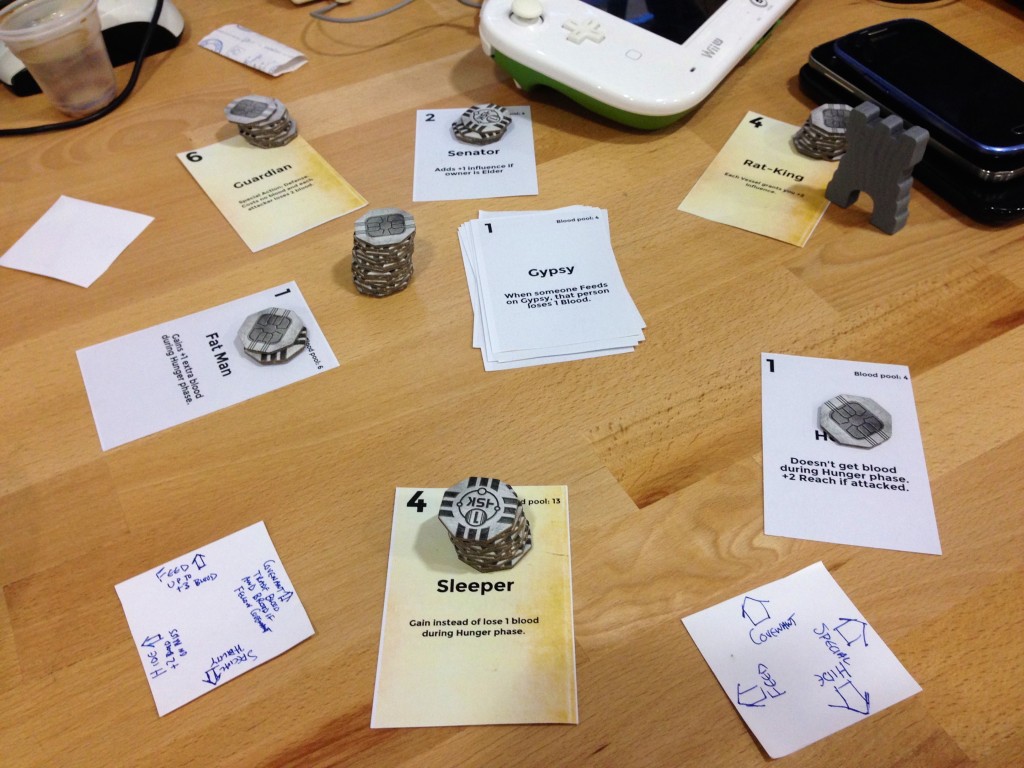 It certainly had some problems – especially with the real-time four-directional action card that each player revealed simultaneously – but I was incredibly excited. I took the next couple days off from Subnautica and rapidly iterated on the game, improving it a lot.

A couple months later, after a couple dozen prototypes and about 50 games, I had iterated away from almost all the original rules except vampires (whom each have a unique game-breaking rule btw). I then had a revelation: I had unwittingly turned my just-make-anything game into my hypothetical less-nerdy Cosmic Enounter dream concept. The game that I couldn’t make any progress on I suddenly had made tons of progress on, without even realizing it.

Today I continue working with even more energy towards a finalized set of core rules. In December I sent the rules to the legendary Bruno Faidutti (Citadels, Masquerade, Mission: Red Planet, many more), in the hope that he might be able to give me some feedback. He seemed to like it, and has joined me energetically, taking his own stab at the rules and cards and playtesting as much or more than I. We’re now co-designing it together and I couldn’t be happier.

Maybe if you’re having difficulty moving towards your dreams, the answer is simply to do something smaller that speaks to you instead.

Finding the fun in game design